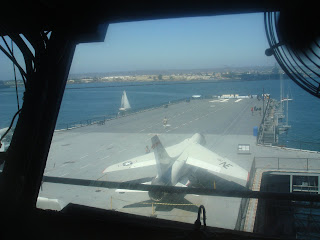 The view from the captain's chair of the USS Midway, a museum. Across the bay the USS Nimitz, a nuclear carrier, is in port.

For the record, the captain does not launch aircraft. the air Boss, whose station is further aft, is in charge of all aircraft. Best account of this I've read is Steve Twomey's feature for the Philadelphia paper in the 1990's aboard the USS America. I use this story in my feature writing class to show good writing. The lead: "Air boss looked aft."

It has been enhanced by my son Vance's trip aboard the USS Abraham Lincoln off Hawaii a couple of years ago. He took video that illustrates the "dance" of the carrier deck, as Twomey puts it.

That's what's been brewing in my coffee pot