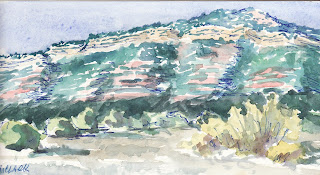 After two months traveling, the merchants on the Santa Fe trail were only a day or so away from the end of the trail at the Plaza in the 1830s when they passed Glorieta mesa on the south side of the trail. On I 25 today, I am only about 20 minutes from the historic Palace of the Governors, where they hitched their horses and unloaded the wagons. The Mexican government had built a road from Pecos to Santa Fe, so the last leg of the two month trip from western Missouri was easier, but time was still slower then. To the north of them, where they probably spent the last night on the trail, were the Pecos mission and the Sangre de Cristo mountains, the southern most tip of the Rocky Mountains.

Time was even slower, millions of years ago when the mountains were pushed up in the Rocky Mountain orogeny, and they tilted the overlaying sedimentary rock up, exposing this cliff face at the edge of the Great Plains.

I painted this quick piece sitting on the ground at the ruins of Pecos mission, looking south, in the light of a fall morning. The chamisa are yellow, as another year passes.