Bearing witness in Sitka, and Alaska

It couldn't have been coincidence that we were booked into the "Bear room" at An Otter's Cove Bed and Breakfast in Sitka, Alaska. We walked in and saw photos and art of brown bears on every wall. What we'd really come to see was Sitka, and highest on my list was the Fortress of the Bear which cares for orphaned bear cubs, especially Brown bears, essentially large grizzlies.
Those who know me, and my son Travis, know we revere Grizz. He may be our totem. I've collected books and read about them, bur other than one siting at Glacier National Park and in zoos, never come very close to them. We did come across a fresh footprint in Glazier those years ago, and promptly changed course. We're not afraid of bears. We respect and honor, and if you're jogging or hiking or camping in bear country, you're the intruder. 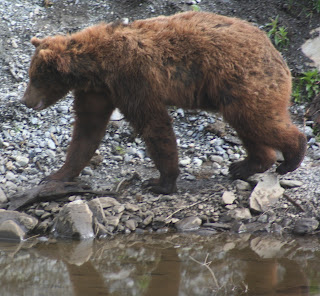 But I was unprepared for the adventure of spending an hour watching and listening to the permanent residents of the Fortress of the Bear, watching them from a safe height of 17 feet, listening to the dedicated zoologist tell us about them. You can find out more at the website: http://www.fortressofthebear.org/
We learned that Baranof Island, where Sitka is located (the former capital of Russian Alaska), covers about 1,600 square miles, and there are about 1,600 bears on it  in the wild. Admiralty Island, which we went past on the ferry trip to Sitka from Juneau, has more bears than any place int he world, and it's a huge wildlife refuge. 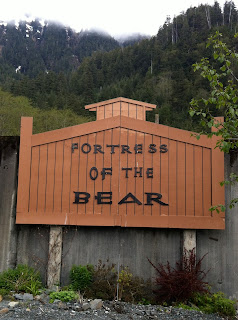 We did see this black bear on our glacier trip. Blacks and Brown don't get along or occupy the same territory. Blacks are herbivorous. Browns eat anything, including black bears. 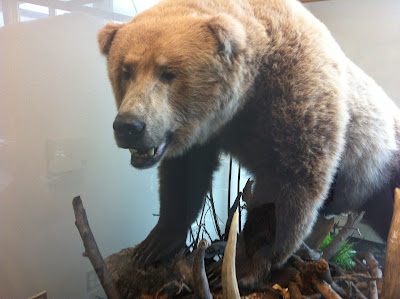 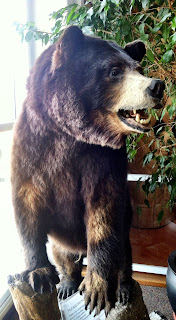 I did get closer to two brown bears, but they were stuffed. Above at the Sitka airport, of one killed while eating the elk the antlers belonged to, the other at the Mount Roberts tram at Juneau. The only grizzlies in the lower 48 are in Yellowstone and Glacier and perhaps remote areas of the north Cascades and Idaho. And there are rumors of a few, "Ghost Grizzlies" in the San Juan mountains of Southwest Colorado. All the others have been killed off. These are smaller than the Alaskan Browns because they have more wilderness and richer diets (Salmon), but they're genetically the same. There is some disagreement on that, and on how Kodiak bears are different, but you can do your own research for that.
Here is some of the art that was in our room at An Otters Cove Bed and Breakfast (the other two rooms were decorated with eagle and whale art). http://www.ottercovebandb.com/
These are cropped and sorry about the reflections.
You can tell I had a bear of a time in Alaska. 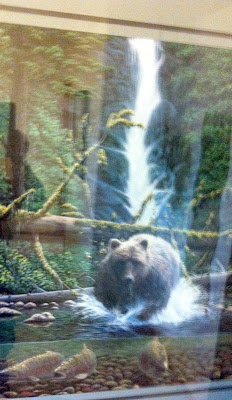 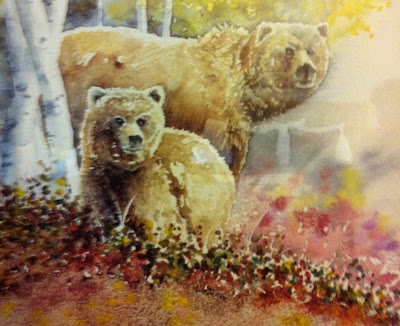 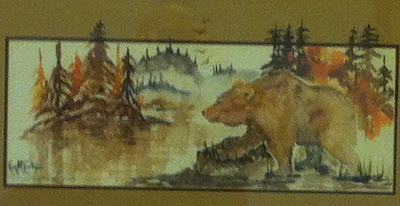 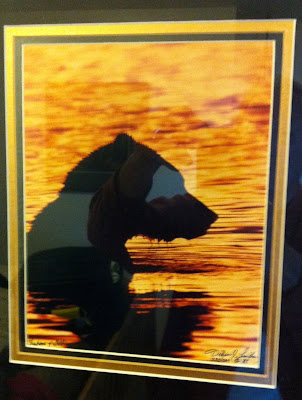 Finally, Alaska lives on tourism, and judging from just a few of the carved pieces of art in the Russian American Company in Sitka, lots of people like the bears too. No, I didn't buy one, but should have.
http://www.russianamericancompany.com/ 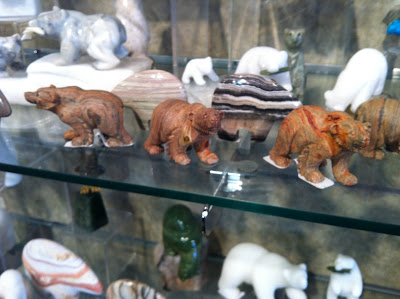