Why did your mother say "Yes"? 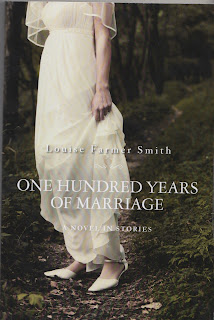 When I opened the mailbox the other day, there was this package, hand addressed to me, with the same delicate handwriting on the return, from a woman in Washington, D.C.
Inside was a paperback book "One Hundred Years of Marriage," and a handwritten note from the author, Louise Farmer Smith, a native Oklahoman.
Her note explained that we were meeting because of Jeanetta Calhoun Mish, publisher, poet and friend whose books from Mongrel Empire Press  I've reviewed here before.
Farmer's book, a novel in stories, is set in Oklahoma and springs from two questions she asks in her note to the reader: "What was your father thinking the night he proposed? Why did she say yes?"

What fuel for the imagination.
She starts in 1960 and goes back in generations of the same family into the 1800s before returning to 1979 in the last of six stories--a Michneresque structure, complete with a family lineage chart.  You can see more about it at Amazon. http://www.amazon.com/One-Hundred-Years-Marriage-Stories/dp/1468173758

Farmer, a descendant of pioneer dugout dwellers in Oklahoma, is an author with degrees from OU and Yale, says these are fiction, but the characters are such real Okies, you know she knew people like them. It's all the more real because of her detail of Oklahoma landscape and college town.
It's not a happy book, nor sad, but raw and realistic, sometimes disturbing because it's so real about ordinary Okies, their matches and mismatches, with humor offsetting some of the darkness. I think one reason it jars me is that all our families have had versions of these dramas somewhere in our lives. I was captivated  at the first story, "The House After It Was Leveled--1960." It's narrated by the oldest college age daughter about her mother going through menopause. Consider the first sentence: "I looked like the four of us might eat supper without talking about Mother's condition, ....," You have to keep reading, don't you?
A couple of favorite phrases from that first story:


"Dust swept up from the new flowerbeds and swirled around the foundation of the building. I hoped from the bottom of my heart that she would pour out everything."

"At night I law awake, noticing how our house sounded. ...but now the house itself made a kind of wheeze every once in a while like it was remembering the time before it was level."

I'm halfway through, and I admit, I have to catch my breath after each story. The stories remind me of the old black and white photos of families through the years, but with flesh and emotion oozing out of them.