One of the highlights of any trip that always stick in your mind afterward would be the unexpected, unplanned adventures, no matter how brief or small. Such is was for us a month ago when we walked out of security at the Juneau, Alaska airport and asked where the small plane area was.
We'd just walked off the Alaska Airlines jet from Sitka, a 21-minute flight at 7 a.m. Our travel agent had booked us on a small plane fight with Air Excursions to Skagway that morning at 11, so we'd arrive in time to board the Yukon Whitepass narrow gauge railroad about 12:45 on one of my must-do trips. So we'd been up at 4:30 in Sitka to get ready, drive to the airport, drop off the rental car, and be on time for early boarding. We knew it was going to be a tiring day with so much packed into it. We had no idea what an adventure was ahead.
We walked up to the Air Excursions counter--one of three or four small plane counters at the Juneau airport, and asked the woman if we could make the 8 am flight instead of the 11. I stress about close connections, and we were flying blind since we'd not been here before. I'd been told that Skagway was small and there was no problem, but... .
She checked with the flight, the load and finding if there was still room,  checked our baggage,  writing our name on a pink tag that was stuck to each bag, after it had been weighed.  We sat down in the small waiting area, and watched the clock tick past 8 to about 8 15. Then this young handsome guy walks in with a smile, introduced himself as Tyler, and said "Let's go." No security, just through the doors and out on the tarmac toward several small planes. I thought we were headed to one of the larger ones, but no, we kept walking, toward several small single prop, low wing Piper Cherokees, reflected on the rain wet concrete.
We went to the last one, and he climbed on the wing, opened the door for us and Susan chose the back seat, clearly nervous. Behind her the plane was stuffed with boxes for freight. I got to sit in the front seat beside the pilot.
Chatting away, he put on his headset, tested the engine, and rolled out on the runway we'd landed on in the jet not long ago. Off we went, into the cloudy sky for about a 40 minute flight to Skagway (The ferry ride back in two days would take five hours). As we climbed into the sky, behind us the Juneau airport stretched, and an Alaskan Airlines jet was rolling down the one runway. 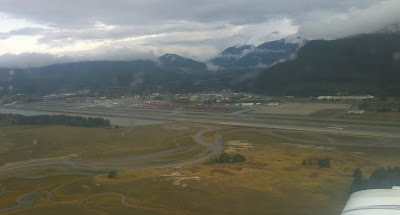 I could tell Susan's tension, and a little of mine too, but soon the scenery and view just took over. Tyler apologized for the cloudy weather because he couldn't show us all the glaciers, and after getting up to about 2,000 feet, dropped down to about 1,500 feet below the clouds for a smooth flight...one he probably makes every day in almost all kinds of weather. 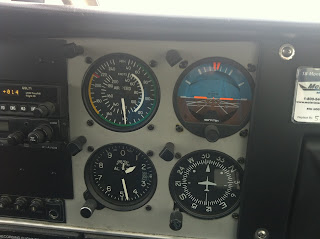 Watching his gauges--we were doing about 140 knots (150 or so miles per hour). At the low altitude you could see so much. As always, the scale and immensity of Alaska just overpowered my senses. I tried to treasure each of these few minutes in a small plane, and would do it again, just for the plane ride and looking at the stunning land. We were flying below mountains, drinking in views that were magnificent, but hinting of so  much more. 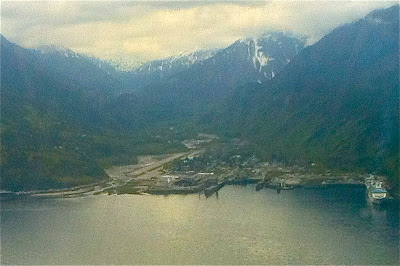 Soon Skagway appeared in front of us, only a few blocks wide, with a runway on one side beside a river and steep mountains on another...a cruise ship docked near the mountains. I'm so glad we didn't take a cruise ship, for we would have missed this short trip of a lifetime.
Then he nosed the plane down, and the runway grew in size as we got nearer. I was reminded of videos of planes landing on aircraft carriers in WWII, but this was safer, and longer. Then we crossed the end of the runway, landed and taxied back to the terminal. 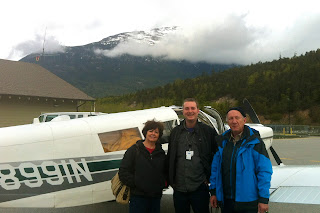 Climbing out of the plane, our baggage was unloaded from the nose area, we snapped a picture, and loaded memories beyond measures.
Hope you enjoy part of our flight.... 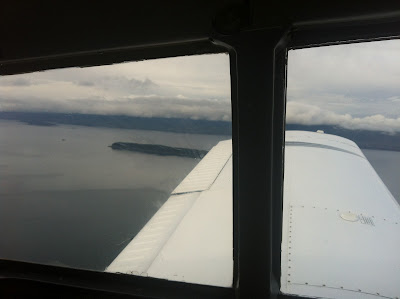 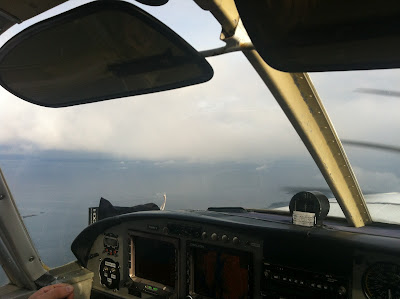 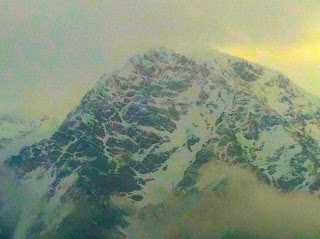 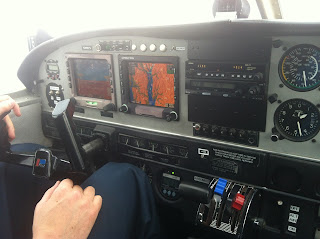 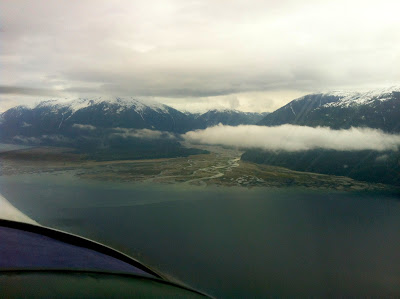 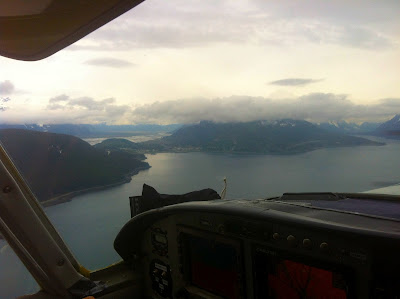 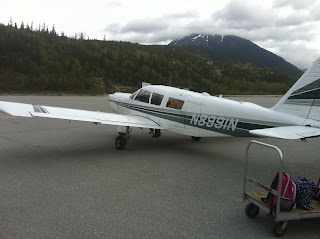