The forest primeval, and cabin 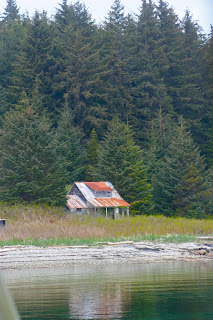 Cabins speak to me, my imagination, my fantasies, and more. When I saw this at Angoon, the Tiglit village that is the only occupied village on remote Admiralty Island in Alaska, home to more  brown, grizzly, bears than anyplace in the world, I snapped the shot from the ferry. I discovered this place has only 300 residents, is visited by the Alaska Maritime ferry only once a day, and less than that during the winter. I think these are my kind of people, and it demanded a painting. This is the first attempt. The second is underway. I immediately thought of Longfellow's Poem Evangeline, that began, "This is the forest primeval...."This is what is now New England looked like before we destroyed it.