Turning the pages of the first half of 2012

"One Hundred Years of Marriage" by Louise Farmer Smith (See the previous post) is book 12 of those read as the first half of the year comes to a close.  I thought I was behind, on one a month, but no. It's been an interesting reading 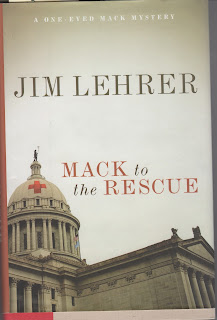 The two most previous books I've read are "Repetitions" by Doris Cohen about reincarnation,  and "Mack to the Rescue," Jim Lehrer's satire set in Oklahoma, with a one-eyed assistant governor who reminds me of George Nigh, and a whacko governeor who reminds me of Frank Keating. I know I'm late started reading these, but it was signed by the author, bought at Full Circle Book Store. http://www.fullcirclebooks.com/ Neat use of place names, for anyone who knows Oklahoma.  He makes up a couple of places, but I only found one error--aint' ever gonna be a Walmart in Waurika.
Just before that, I've read "Sagebrush and Paintbrush" about Charles Russell by Nancy Plain. I bought it in Fort Worth in the spring, visiting with my brother and the watercolor show at the Amon Carter. It's really a children's book, but I stll learned from it. And I bought and red the museum book with the show, "Romance Maker" by Rick Stewart, about Russell and showing the watercolor paintings. What you do learn though is that no printing can approach the grandeur of the original art. 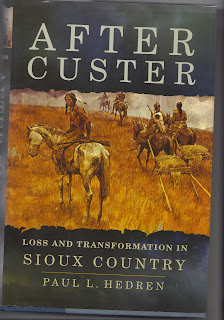 About the same time was "After Custer," by Paul Hedrin, the winner of the Wrangler Award at the Cowboy and Western Heritage Museum, that I judged in nonfiction. The Oklahoma connect is that it's printed by the OU Press...and I've mentioned it in my current story on the OU Press in Oklahoma today, "Pressing On."
Here's the lead: "Custer was dead, and Crazy Horse, Sitting Bull and Morning Star were desperate." Paul Hedren's Wrangler-Award winning book, "After Custer, Loss and transformation in Sioux country. The Oklahoma connection--published by the OU press. Great reading. Makes you sad and ashamed of what white people did to the Indians in the name of "civilization."