A gospel of friendship and resilience

"'Let's Booth!"
"That was the cry one afternoon soon afterward, and the journalists did congregate once more that spring, where hung the plaque.

"'To Bob,' rang out to clinking glasses, and stories and tears did flow. But The Clark left The Cribbage board in the office, and one seat was vacant.

"Summer came and was a blur, but the following fall, The Clark thought about retrieving the plaque and displaying it in the department. It was not to be. Forsooth, he went to the restaurant, and found the business closed, and the plaque and The Booth locked up. He was sore vexed. 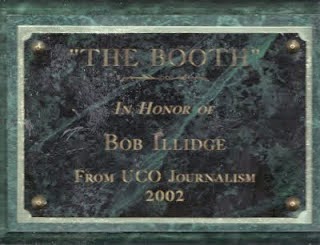 "The Booth is no more," he despaired to his colleagues, to their dismay and gnashing of teeth. This was the same time The Department merged with another on campus, doubling its size in faculty and students for the good of the students. Verily that stress also was a shock to the former journalists. They seemed to wander in a daze, trying to find who they were. They'd lost a friend, a Booth and a community in one fall.

There was no Booth to booth to.

"Eventually, they tried other gathering places in Edmond (There be Republicans there), but it was not the same. The was no Booth to booth to. Even some of their new colleagues from the other department joined them, and began hearing tales of The Illidge, who they knew by sight, but not by stories. "To Bob," was still the introductory toast, but it was not the same.

"One day The Clark noticed the old Booth location was being remodeled, and he hastened there, seeking The Plaque, only to be forbade to enter. He considered breaking and entering to rescue the artifact. The next day he tried again, describing the item he sought, and was successful in bringing it out, to be displayed in the office of the Queen Bee.

"But still there was no Booth to Booth to. The faculty tried the new restaurant at the old location for several weeks, but still it was not the same, and heavy with ghosts. Eventually, The Clark, because he got paid the big bucks to do such things as an administrator (forgive the profanity and pray for his soul), found a restaurant a mile away that had a booth.

"Boothing was back, and over the years the numbers of people attending swelled. Teetotalers, assistant deans, broadcasters and communication profs and others from the merged department frequented the location, usually on Thursdays, to joviality and the best of collegiality. All were invited and welcome.

"All newcomers heard the story of The Illidge. All toasted, 'To Bob.' All waitresses at the new Booth knew each of the Boothers and their drinks and food preferences, and always greeted them with great joy, because yea, verily, there weren't like other stuffy professors, and they did tip grandly. Talk was about everything, and rarely about work, but about people, and ideas, and yea, even griping seasoned by laughing about The Illidge, and how he was probably keeping Yahweh in stitches with his humor.

Where there is sunshine, someday there will be clouds.

"But where there is sunshine, there will someday be clouds, as the Psalmist should have written. One recent year, one insecure and bloated Recalcitrant who never attended The Booth did disapprove and complain to Mission Control, though the Booth was ecumenical and all were invited. Recalcitrant spoke with ignorance and arrogance about The Clark and his "cronies." Hence did also insecure and micro-managing Mission Control complain to The Clark that he was making departmental decisions in a 'bar.'

"The Clark was floored by the blasphemy, not about decisions--which were never made there because adult beverages wash away the inanity of academic decisions--but by disparaging The Illidge and The Booth. While it was a temporary setback, it only strengthened the bond of The Boothers, and, pun intended, 'got their Irish up,' assuring their belief in The Booth, a faculty retreat from thus proven inanity of higher education, from the 'vagaries and vicissitudes' of life.

"Yea verily and forsooth, today, Booth is an active verb. The plaque will soon be hanging on the wall when they Booth again."

P.S. Only journalists know the significance of the -30- and it carries a double meaning here.  But Yea Verily, the booth is no more dead than The Illidge. The Clark has found since initially writing those numbers, that the story continues. In the years since, Booth has moved to various locations, but it always starts with a toast, "To Bob." And the stories grow.

The story continues: An epilogue, a postscript, and two appendices (of sorts), and an afterword will follow.