Booth is a verb...chapter 11--The office, redux

A gospel of friendship 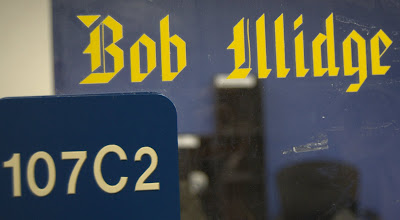 Sign above the door of the office of The Illidge.

(Since 2009, the office area has been appropriated and transformed with university money into part of the new offices of a new department in the building)
"That sign was taken down, when The Illidge retired. But not so the letters he had attached to the window of his office behind The Vista in 107 C2, long before the uniform signage was adopted around campus. They may be little noticed, but he is oft mentioned in the department and always toasted in The Booth, as one who was bigger than life. He still inhabits this department.

"'Here's my computer. It never crashes.'


his office was a sanctuary for faculty

"Verily, his office was also a sanctuary for faculty...you could go in there and he would listen, and most of all, most people never knew where you'd disappeared to.

"After he retired The Razorback Prof inherited his domain, and has been there ever since...until this week. She will move upstairs to where The Clark had temporarily pitched his tent this summer and fall. Yeah, verily, we are all sojourners in strange lands.

"So it is written. As the eldest and most wizened of the old Journalism department, in the various vagaries and vicissitudes of life, The Clark will ironically, or appropriately, as he is writing the story of The Booth, move into the former office of the Illidge.

"He has no plans to take the yellow lettering off the glass, unless the ghosts are too strong."