Letter to Bob from the Old World Booth, Redux 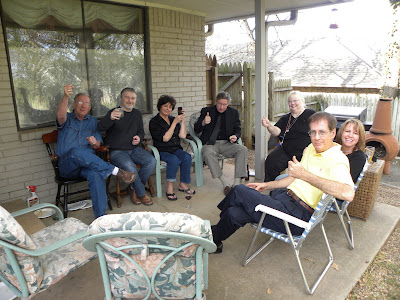 Well old friend, sorry I haven't written sooner. Fact is, writing just slipped my mind, but I was browsing through a Charlie Russell book today, "Trails Plowed Under," written by the artist about a year before his death. The Introduction, written by Will Rogers in 1926, was a letter to Charlie in heaven, and I figured, what a great idea. And he started it out, "Old World."

But of course, it ain't as though we've forgotten you, you know that from the many times you've heard us toast "To Bob," in the booth and elsewhere in the five years since you've be assigned to keeping God in stitches. I figure, given the state of the world, he needs you, maybe more than us, but even if not, he does get to pull rank.

I hope you got to see and hear our party for you on our back porch earlier this month. We had a good crowd, and I'm posting the photos with this letter on my blog, just in case. I know you don't understand this blogging stuff--I remember you having trouble with email. Just think of it as a sort of digital diary and newspaper column. But yes, unlike your lead pencil, it does crash from time to time.

Anyway, in case you missed it, I  thought I'd catch you up on things down here since you left. Frankly, the place has gone steadily downhill, most of which is my fault--actually I'd like to blame you because you weren't around to set me straight. Yep, I got this wild-haired idea to merge with the communication department--I know, I can see you rolling your eyes. We needed to get together with the broadcast folks, but the communication people came with the deal. They're good people, but as you said, they were more "touchy-feely" people than us. They do think differently.

That was five years ago, and as a testament to my foolhardiness, I got elected chair again of the whole outfit--22 full time faculty and as many part timers--a huge department--meaning of course, more problems. Then of course, not being able to get my senses straight by playing you cribbage at least once a week, I got bogged down and lost a couple of administrative battles. The result is that I'm no longer chair, having been given the job of running the Oklahoma Journalism Hall of Fame, which I do enjoy, cause I get to work with journalists and don't have to worry about all those personnel problems, and the endless administrative meetings that waste so much time, but which academics just love. But I've moved out of the building and spend less time with students.

And now, the worst news I can tell you...Sherry Sump is retiring in a couple of months.  I can tell by your silence how stunned you are. You and I used to get to the office at 7 a.m. and sit in the darkness and sign and enjoy silence and talk, and we'd often talk about what a great secretary she is...we'd agree she's the best we'd known.

So the department has changed radically since you've left, and when she's gone, it'll sure never have the same character and spirit.  Students, alumni, faculty, everybody likes Sherry. She's been here almost 15 years now--can you believe it? We joke that she's my "other wife," because we're so much alike and I rely on her so much. We were arguing with each other one day--you know, good natured disagreement like all journalists have...and a student overheard it, stuck his head in the door, and asked, "Are you two married?" Ain't that a hoot?

You can be glad you're gone, because there's more and more official nonsense and paperwork--I swear they're trying to make us all clones--and there have been no real raises since you left.Your "Sweet Pea" and family have been down to visit a couple of times, and we keep wanting to get up and visit. I hear the redbud tree we bought is doing well in your front yard.

We think of you often, almost every day, and you'd be pleased to know it always brings a smile.. Went to a NCAA basketball tournament here with son Travis--he says hello, by the way--and Kansas State was playing. Immediately, I thought of you referring to it as "Silo U."

On personal news, I've got six great grandchildren now, and I hear from Liz that your family  and grandkids are doing great things, including being at Notre Dame. Those are the important things, aren't they?

At any rate, at our party for you, I dug out the old cribbage board, your ugly green coffee cup and a photo of you and I playing cribbage in the "Booth." They were on our back porch during the party, and you were toasted many times. I used good Irish Catholic whiskey, Jameson, for the toasts. The booth has moved about a mile south of where we played, but the plaque is hanging there, and we visit it almost every week. But I haven't played cribbage since our last game.

There's some people up there I'd like you to look up and tell them I said "Hello." There's a one legged artist up there, probably doing portraits and landscapes, name of Terrence. Tell him you knew his oldest son, and  that son has taken up watercolors and is pretty good--not as good as his dad, but good enough that a Clark watercolor hangs in the Illidge manse in Wichita. And my Mom is up there too, a tall slender lady with a great sense of humor, and all her brothers and sisters. They're probably located in the East Texas section. Amble over and tell Mom how much I miss her, and share some stories.

Well, I'm about out of stuff to write. I look forward to sitting down with you for another cribbage game, but I'm not in any big hurry to do so, just yet. We think of you often and miss you. Take care of God--he needs all the good spirits he can get these days.